Inspiration for the Game

I have always wanted to make a platformer. Platformers have always been my favorite video game genre. I think the Super Mario Bros. influence speaks for itself. It’s my favorite 2D platformer series ever. I’ve also been inspired by Super Meat Boy. It has levels that can be finished quickly but are tough to beat. So I figured I’d make a game that featured my own take on that idea.

I recommend watching and reading game reviewers who go in-depth into what works about a game and what doesn’t. This can teach you a lot about game design.

As you go through these levels, notice how there are several obstacles that you will learn to overcome just by playing. I designed these levels so that you can learn while playing, and you won’t be able to progress until you’ve learned skills that you’ll need to finish this game. 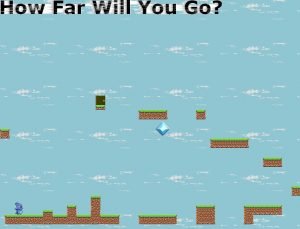 As soon as you begin, you’ll notice three small pillars you need to jump on.

This is to give you a chance to try out different jumping heights by holding the jump button for different lengths of time. Longer jump heights allow you to jump on more of these pillars. After the pillars, you’ll come across the first bottomless pit. Since this is very early in the game, if you mess this up, the you’ll quickly get another chance to conquer it. you must jump over a few gaps before jumping to reach the higher platforms. If you fall off the higher platforms, you will still have a chance to land on the platforms below to avoid dying.

Note the blue diamond hovering under one of the platforms. 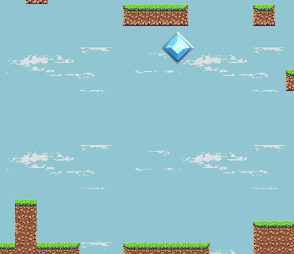 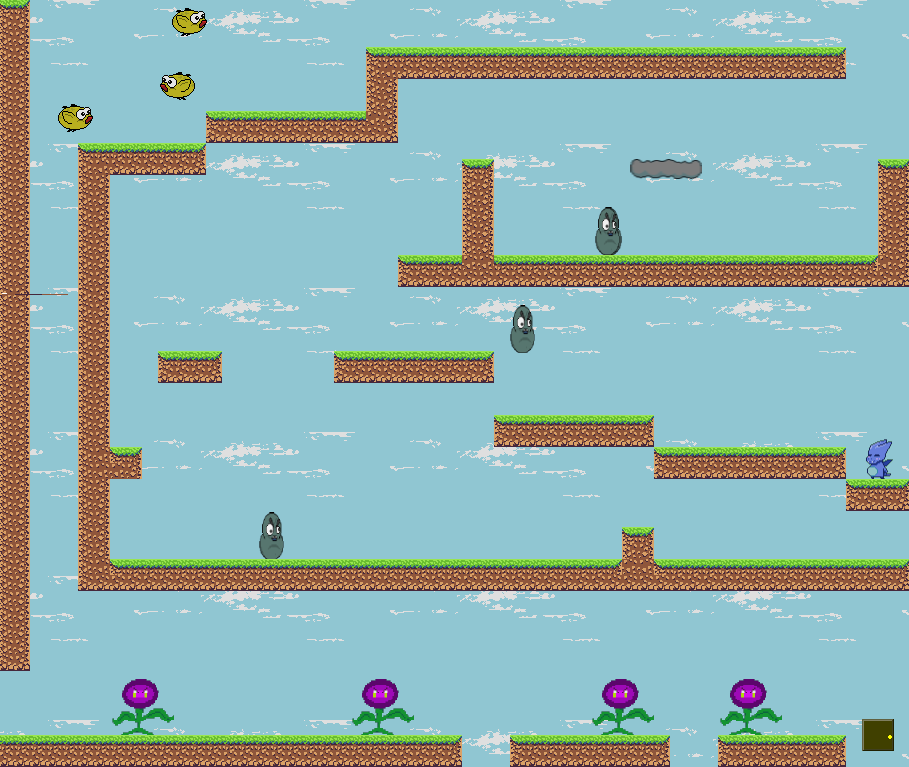 Now that you have a grip on moving and jumping, it’s time to meet your first enemies!

The first few enemies you’ll come across are what I call “Michael the Grouch,” but for now we’ll call them Grouches. You need to react quickly, or else the first Grouch will fall on you and kill you. The Grouch can be killed by your jump (and any other attack). The Grouch is a bit big, so you’ll need to hold the jump button a bit to jump high enough to land on the Grouch. After the first enemy, you’ll notice another Grouch below you and two to the right and above you. You need to go upwards to continue the level.

At the top of the level you’ll see your first flying enemies: three birds that go left and right.

Unlike the Grouches, these Birds won’t fall off platforms. Make it past the birds, and you’ll fall in front of a plant enemy!

Notice that you’ll create a shock-wave.

The level was designed to teach you that you can create a shock-wave by falling at a high enough speed, which is why I designed it to make you fall down a long height. The shock-wave can be used to defeat enemies, which you’ll learn after you accidentally fall in front of the first plant, creating a shock-wave that kills it. Obviously you can jump on the rest of the enemy plants after the first one.

You should already know how to get past the bird and Grouch at this point.

What you may not know is how to get past the dead trees in your way! You cannot go through this area until you learn how to spit fire. There is a red crystal near the row of trees. Pick this up and you can spit fire up to 4 times, just enough to get rid of the trees in your way.

Unlike the first one you came across, it’s over a pit of spikes, so be careful! However, there’s a small space in the center of the pit, so if you fall, you might land and still have a chance. After that, make it past the next spike pit with the bird hovering above it. Mind your jump height. Jumping too high will cause you to bump into walls. This is why you’ll need to know how high you need to jump in each situation if you want to finish this game.

At the bottom of the level, you’ll come across another moving platform. You should have had plenty of practice with platforms at the point. The first moving platform (the one in Level 2) floated over enemies you could easily kill. The second moving platform you encountered, which was earlier in this level, was over a pit of spikes that had a small “safe zone” so that if you fell, you’d have a chance to pick yourself back on. This platform, however, floats over a bottomless pit, so there’s no room for error. Notice the increase in challenge.

The last set of obstacles takes place in a “forked road”: the top path is the standard route to the exit, with spikes and Grouches; the bottom path rewards players with a shortcut if they could figure out how to bring at least 3 units of fire ammo with them to this point.

Finally, there are at least two other shortcuts in this level! Can you find them? 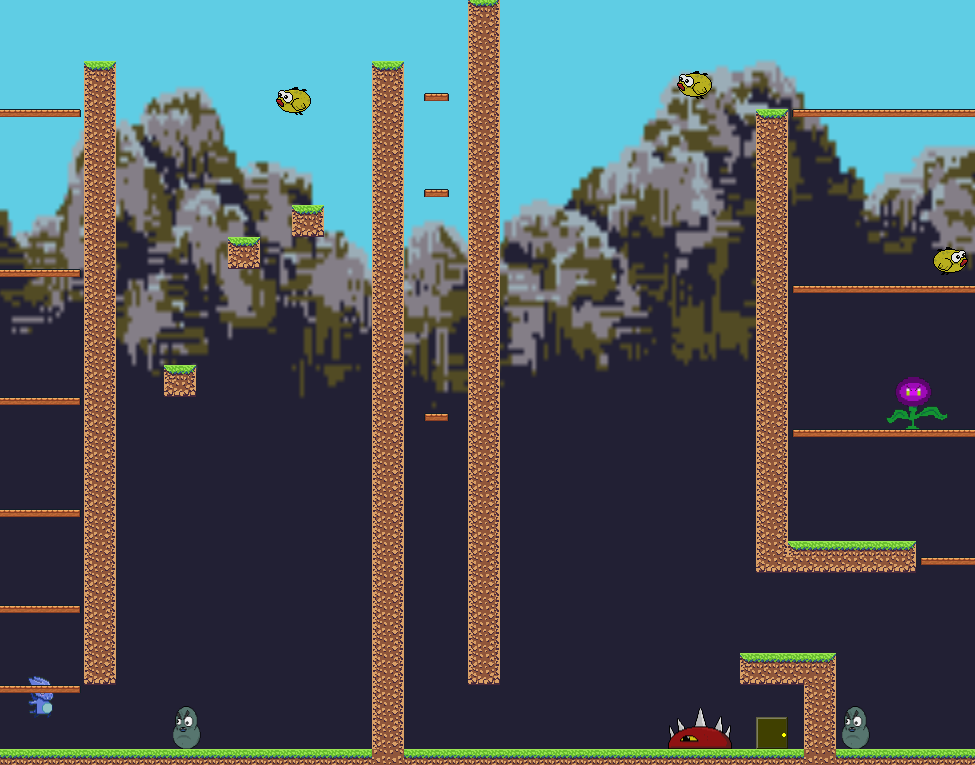 This level introduces you to thin platforms. These are platforms that you can jump on from underneath, as well as fall through by pressing down.

As soon as the level starts, there’s a Grouch walking toward you. You have a few seconds before he gets you! React quickly enough, and you’ll find yourself on top of a new type of platform. You can jump on these thin platforms from under. Make it across the gap with the bird and you’ll see more thin platforms. You won’t be able to continue until you learn how to fall through platforms by pressing down. You’re forced to go down through several of these platforms, so you’ll get the hang of it by the time you reach the bottom.

After you learn about this new concept, you’ll have the chance to test an old one: the shock-wave. Notice the spiked enemy between you and the door.

As you can probably guess by the spikes, you can’t jump on this enemy. So how can you kill it to reach the door on the other side?

This area will test what you’ve learned about thin platforms so far. Obviously you’ll have to jump on them from under, but you’ll also need to avoid enemies while you’re making it to the top.

I hope this gave you a basic idea of what was going on in my brain when I designed these levels. I hope you learned something about level design from this article. It might give you inspiration for your own level designs!

Please check out my game using one of the following links: