This is the first time that I write an article by “4 hands”. This is to say I’m sharing the space with another author. In this case, I joined my friend and relative, Antonio Marcelo (@amarcelo">@amarcelo), to talk about a game that left me simply amazed: Airships: Conquer The Skies. I have a weak spot for the Steampunk universe. I even played classics like the old Sky Galleons of Mars from the old GDW, which introduced me to this genre. Since then, I’ve been getting into this universe and learning more about it,  including Space 1889 and RPGs like Castle of Falkenstein. Wargames have influenced me and today I’m working with the collaboration of several people in a wargame of miniatures for 3D printing called Scavengers, on steampunk and fantastic themes  (pause for commercials).

But after learning about David Stark‘s Airships, I must confess my prayers were heard. This is an RTS Steampunk wargame where you control a nation in the best Victorian style, in search for achievements in aerial and land battles. The premise of such a wargame has been already in my mind for quite some time, but the work done with Airships made me rethink many ideas and gave me some “ammunition” to expand the things I’ve been developing on various projects. In this article, we’ll talk about this fantastic game and some things about game design. Let’s get to it.

Let’s Talk a Little About Game Design (By Antonio Marcelo)

Upon receiving the review copy of the game, the first thing I went to take a look at were some aspects that always catch my eye first: mods. I played the tutorial (mandatory, by the way) in which I found the aerial ships editor, the Landships (H.G. Wells/Julio Verne approved) and the buildings. At this moment, I had already noticed that this game has this uniqueness to it that I usually bring up when I talk about other games: it is not afraid to let players free to create stuff into it. I even started playing around with some constructions during the tutorial stage.

The editor is one of the coolest things about this game. The easy-to-create airships, landships, and builders as you make mods is incredible! The level of integration and component balancing is a very well executed game design masterpiece. We’ll talk more about that in a minute. Stay with us.

What is striking is that we can test our design against some game elements, both terrestrial and aerial in search of an ideal construction. At this point, the game brings an extremely rich way of exercising various aspects of game design and working your skills. I have developed a number of things, of which I have not yet shared, but I intend to do so soon.

Here’s an interesting point I’m focused: the mods. The game is highly customizable, with the design files generated in JSON format and easily edited in Notepad ++.

These files are usually stored in the Users / User / AppData / Roaming / AirshipsGame directory, where the structure of various game elements is stored. There is a very good video on modding, by David Stark himself, which I’m leaving for you below:

This video is a must-see for anyone who wants to create new elements for the game. By the way, I need to talk about the scenario editor, one of the most important features for anyone interested in practicing game design skills. All of the games I’ve played with scenario editors (Walls of Rome, Age of Rifles, Steel Panthers) have provided me with some very important lessons about game balancing, strategy, and game design itself. The Airships editor allows you to work with this and put your designs to the test against some types of AI.

It already comes with some ready-to-use scenarios (the Kraken and the Giant Spiders are hilarious), but I was a little disappointed with the Smart AI, but nothing that a mod cannot improve. The editor is simple, straightforward and it makes it fun enough for you to spend hours and hours doing just that: designing instead of playing.

This is an awesome option in itself if you want to take a break and do something else other than playing.

In this part, we will do a joint effort to describe our take on the game, as we both could play and explore the facets of each of the forms presented by the Airships. I think its main purpose reaches 4 major types of players: casual, hard, multiplayer and dev. For the casual player, the missions are a quick option to start playing and there’s more of it on Steam. It gives you a quick and satisfying experience. The game comes with a few missions, but the  Steam community is very active and is always putting out many mods.

For hardcore gamers, we have the campaign mode with all the aspects of research, battles, and strategy in general.  Players like us found in Airships some really amazing challenges in this mode. We are now exploring the game in a mega campaign, in which the battles and its progression have fulfilled all of our expectations.

The research feature allows you to evolve and build more powerful units. That’s a basic element in our opinion on any wargame. If you’re the multiplayer kinda guy, the game is not gonna let you down. There are several options such as hosting a game, participating in another game, playing an online campaign, and participating in game servers.

There is a lot to talk about here in this article. We could easily write a couple more just about this game, but we want to leave it open so you can have your own take on these many possibilities of having fun.

And at last, for the dev player, we have all the mod possibilities. At the moment, we are still studying this specific feature to implement orcs in the game (it has everything to do with our steampunk game ideas) and I think, at this point, the mods are easy to install and play (we took some from Steam to study).

The Airships is an RTS, a classic genre that has heavy and known titles in the market. The game itself is easy to play, but it is oriented by the development of very high player strategy skills. It is very important that when you play, you go through all the tutorials, as they will give you a very clear vision of what to do. The controls are based on mouse point-and-click for movement and keyboard shortcuts for actions (we recommend learning these shortcuts by heart because it increases the combat dynamics a lot). As you evolve in the game, you discover more important tricks in building units and also how to explore your choices. We are VERY pleased with what we have seen so far with the Airships. It is really a game tailored to the audience that appreciates this genre, especially for the lovers of strategy games.

The main campaign of the game is very challenging and the player must be careful in his choices, otherwise, he will get easily defeated. Strategy is one of the factors to be considered for a decisive victory. The balance of the scenarios is well done and provides the player with a good deal of strategy to advance on a  well-optimized challenge. Overall, it met all our expectations and exceeded them in many times. 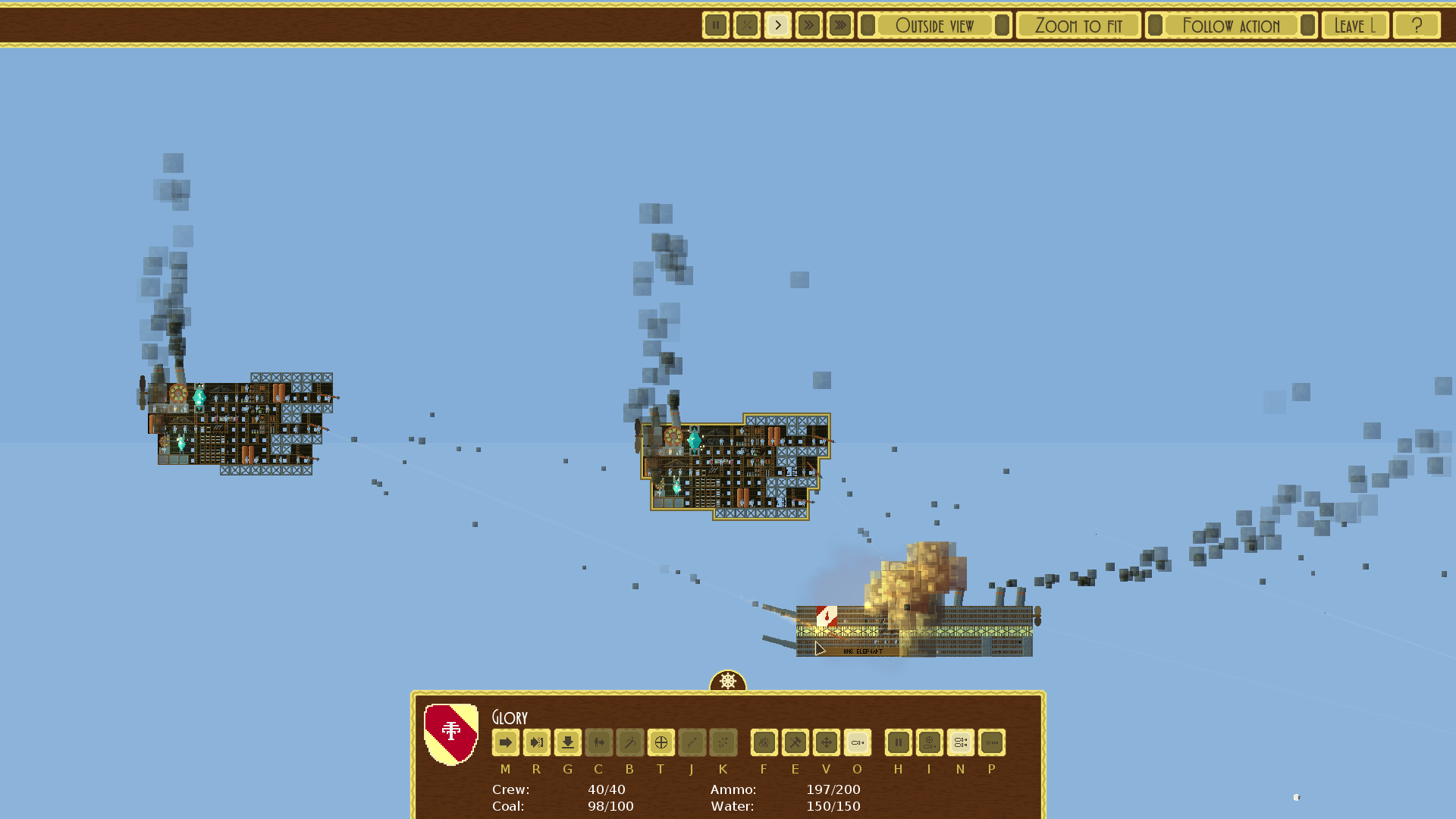 One of the aspects that didn’t necessarily bother me but could be a negative point for lovers of realistic graphics is the way units and the game sounds were produced. The graphics are in pixel art and the sounds very simple. I think that, overall, the combination is perfect, there is nothing left to be desired. The music is also simple, but very well executed and perfectly played. What I liked the most about the graphics was the Victorian atmosphere of the menus and the game itself. One of the things that caught my attention was the crew’s dialogs during and after combat. The game presents what we have best in terms of steampunk: aerial steamships, landships, Victorian wars and a number of cool things seen in several books of the genre.

The game is very light, it runs smoothly with no bugs since it does not have a lot to process, like 3D graphics. The installation was simple and fast via Steam. The multiplayer mode is spetacular. We played online and on a private LAN and we had no problems with lag or connection. So far, we can’t point out anything to complain about it. The interesting thing is that Airships has versions for MAC and Linux, expanding its audience even more so.

These are not exactly our final words because we’re still playing it and we’ll probably be back with more to say about it in future posts. I guess we did not say everything we wanted and maybe we left something out in this article. The only thing we have to say to those who enjoy strategy and RTS style games: buy this game. It is all we expected for this style, as it explores the steampunk theme very well with a touch of H.G. Wells, Julio Verne, and other Victorian writers. It will provide you with many hours of fun and,  and without a doubt, it is a great indie title that stands out in the games market these days. We wanted to talk more, but we’ll let you have your own impressions about it! See you soon!

You can buy the game here:

Airships: Conquer The Skies has everything to conquer the hearts of the RTS genre lovers. It explores the steampunk theme very well with a touch of H.G. Wells, Julio Verne, and other Victorian writers.

Why should education pay more attention to e-sports?