Contributing to the Metroidvania resurgence of the past couple years, the small, two-person development team based in the Czech Republic, Attu Games, is hard at work on their newest title: Feudal Alloy.  Founded in 2014, Attu Games released their first title, Toby: The Secret Mine, in 2015, which found mixed success.

I reached out to Attu Games and they were nice enough to shoot me a Steam Key for the alpha version of Feudal Alloy, so I figured I’d play it through and share my thoughts.

From the jump, the game looks great. The entirely hand-drawn art is gorgeous, and instantly immerses me in a world that is both familiar on the one hand, and filled with fish controlled robots on the other. Feudal Alloy is an action RPG Metroidvania that transplants you in a medieval setting overrun by robots. You play as Attu, your run of the mill fish controlled farming robot, who sets off on an adventure after his home was attacked by robotic marauders. 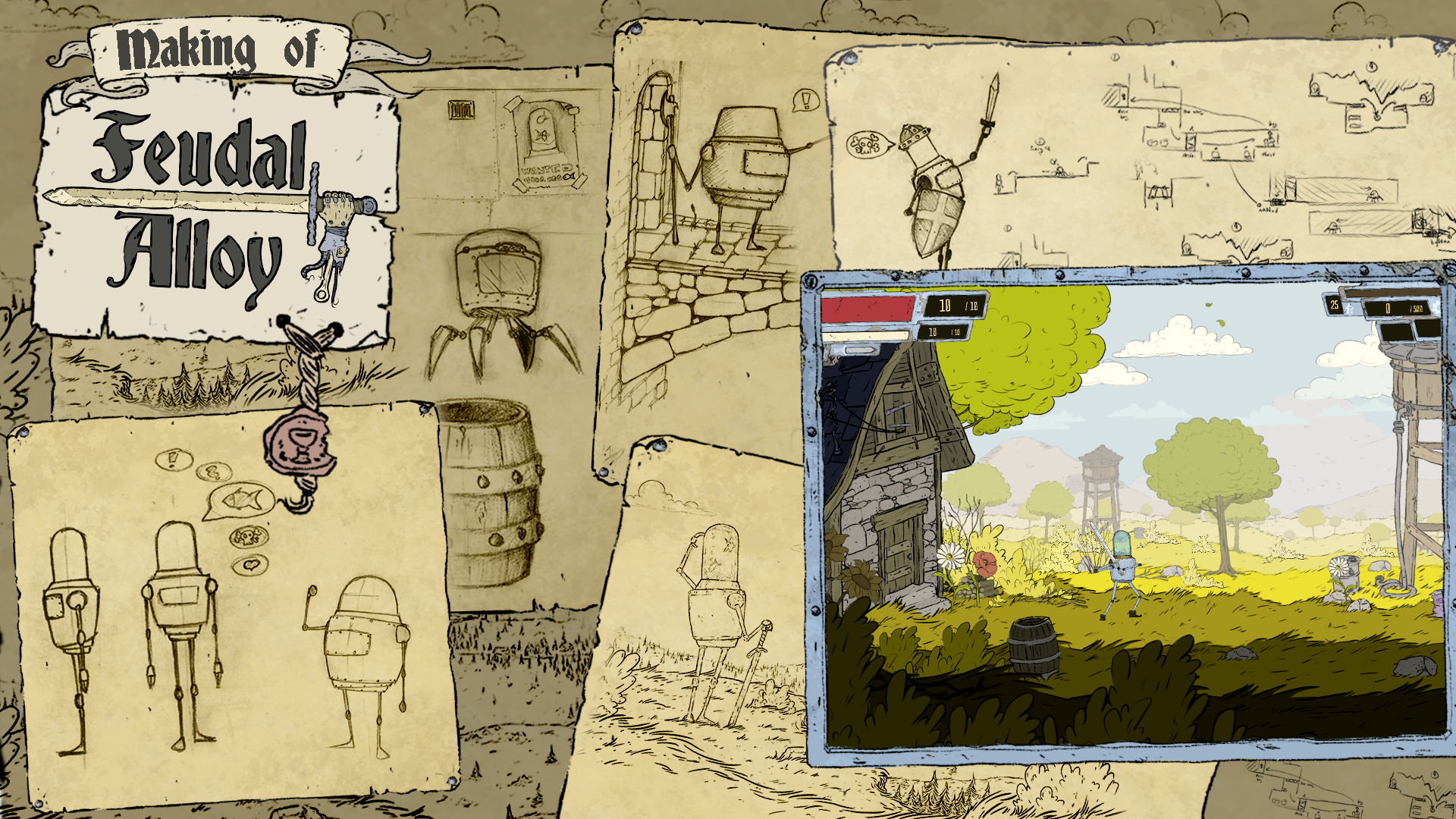 What I think is especially great about this game, which most Metroidvanias seem to neglect for better or worse, are solid RPG style weapon and ability customization. Feudal alloy integrates a system for buying and exchanging cleverly designed weapons and armor which offer customizable stats as well as aesthetic changes to your robot, which I love. The game also has a skill tree you can climb, giving Attu (and the player) the ability to diversify and customize your abilities. I’d assume based on what I can see in the alpha that you’ll eventually have the option to put skill points into everything, but the journey there and having to decide what you invest in adds just that much more depth and gives you the feeling of control over your character’s development and that your playthrough is unique.

Another promising quality of this game is its item system. Instead of obtaining only abilities or weapon upgrades like most metroidvanias tend to offer, enemies and interactable containers like chests, barrels, and crates drop various bombs, health, and most interestingly, experience toward your next level up. I know this isn’t the first game to do this, but I enjoy the idea of having to collect your way to the next level up instead of it being gifted to you when you kill something. Particularly in conjunction with item drops, collectible experience forces you to pay attention to the enemies you kill and what they have to offer. Alongside experience, you can collect different types of thrown explosives. That’s right, grenades. Attu, your fish piloted buddy can collect a variety of explosive, shock, and frost grenades, each with its own status effect and amount of damage. So far, we’ve only seen these grenades, but I like to think that the developers will add other fun useable items for our robotic hero. 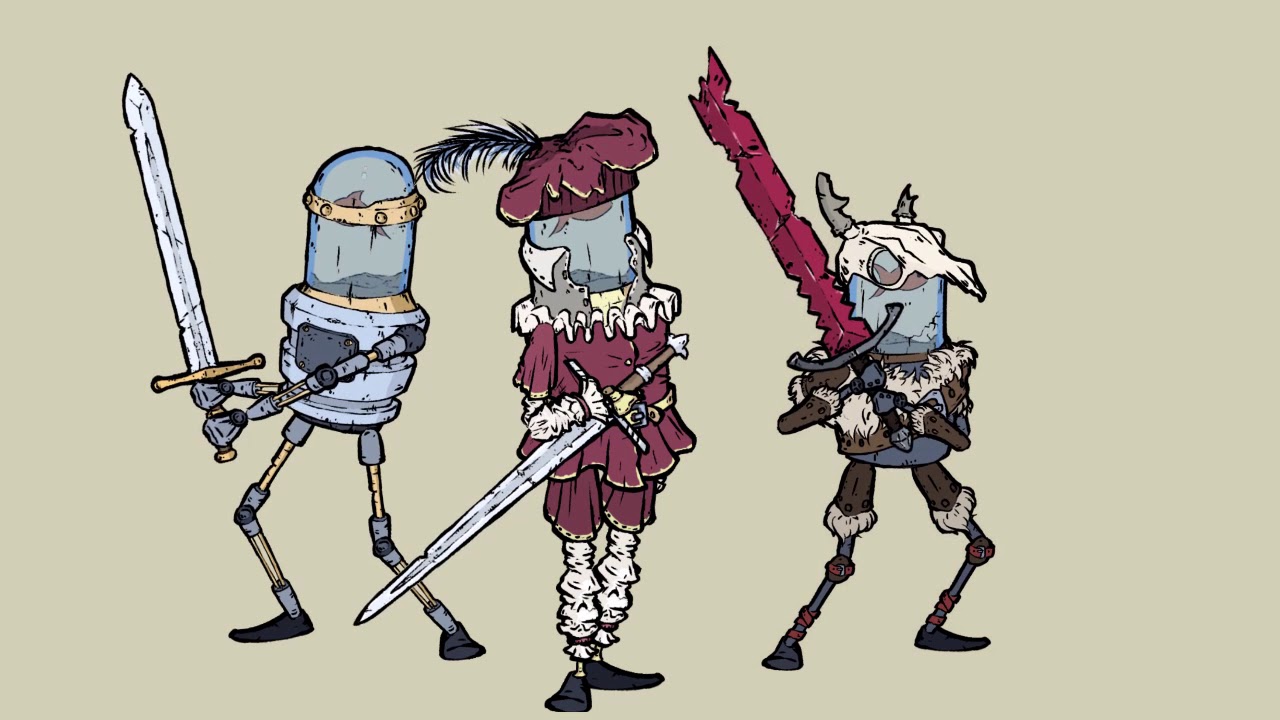 My one concern, though, is with the health system. In Feudal Alloy your health bar is an oil gauge (I know. Clever, right?) The more oil you have, the healthier you are. However, to heal yourself when damaged you have to go into your inventory, equip and oil can, and use it when you need it. In this way, they function essentially as most health potions do in any action RPG. Typically, though, you’re able to stack potions and use them until you run out. This doesn’t seem to be the case here, and you can only equip one at a time. This is complicated further by oil cans (like potions) coming in differing sizes, making a single ‘use potion’ button problematic. This could easily be fixed by being able to equip a stack of potions, or oil, in this case, and just use them one at a time until you run out. Another possible solution could be a hotkey button that when pressed opens up a small, navigable menu to select your usable items. I understand the game is in alpha, and they could very well change it before the games full release,  but it is my one nagging issue, and I wanted to bring some attention to it. 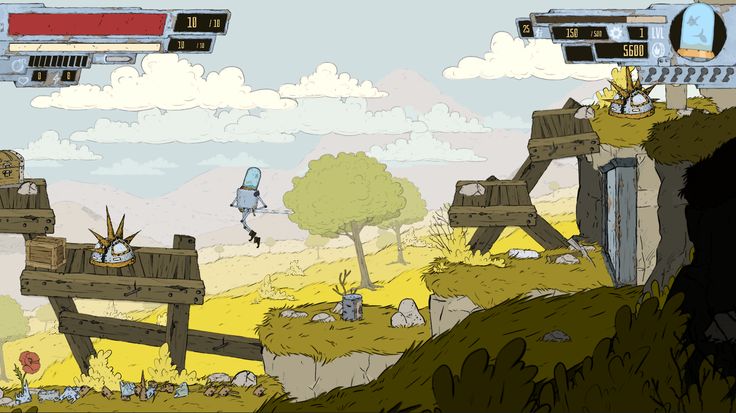 Another really cool feature which demands your attention is your robots unfortunate temperature problem. Instead of being able to wildly flail your sword at any and all enemies, every attack and some abilities generate an amount of heat, which is tracked on a gauge in the top left corner under your health. If you get wild and spam your abilities and attacks, Attu will quickly overheat and you’ll find yourself unable to defend yourself for a time, leaving you vulnerable to any number broadsword swinging, grenade launching mechanical foe. To circumvent overheating, you can collect coolant, and freeze your temperature gauge for a few seconds, giving you the satisfying ability to chop and hack as much as you want before thawing out and again being managed by your temperature.

The levels seem fairly standard for metroidvanias, which is to say there is clearly an expansive map being designed, which you will traverse while you unlock secret areas and abilities which grant access to previously inaccessible parts of the map, creating a larger cohesive environment to explore.

Overall, I had a super fun time playing this game, and I was bummed when it ended. I love the aesthetic, from the visual art to the medieval music. The theme is creative and the game handles really well. It’s clear that Feudal Alloy is shaping up to have all the heart and creativity of the titles that established the Metroidvania genre in the first place.

I’ll definitely be following this game and putting out a full review as soon as I get my hands on it. It is set to release in the 3rd quarter of this year. Be sure to check in again for the full review!

Russell Haynes runs his own review site and is active on social media. Also, he's a super nice robot.

Why is Fortnite so Addictive!?