I am always looking to get up to date with the new dev tools for game development. From the beginning of the old RPGMAKER to the most current ones like Unity, I keep an eye for the ones that fit my development goals for indie game development. Today, I’m focusing on two main tools: Scirra’s Construct and Unity itself.

But as I’m always looking for more solutions to be able to accomplish certain projects, I look for several tools and I end up finding very interesting things. I’m a Voxel addict. I’ve found out that I can do a lot with voxels for expressing myself artistically (which is something I’ve been frustrated about for a long time, because I always wanted to learn how to draw, but I was really bad at it) and I’m working hard with the migration to Unity. I am now in a stage in which I need more study, and of course, it takes time until I reach an acceptable level of confidence.

It was then that, for quite some time, I had been oblivious to a little engine, developed by Justin Arnold, which brought together two things I’m passionate about: Voxel and RPG. Then I decided to buy RPG in a Box to find out what it is about. To my surprise, it is based on a very cool concept that is in constant development, and which adds a number of features for development in the RPG genre.

In this short review, let’s talk a bit about the RPG in a Box and make some important considerations, but from the point of view of an indie game developer.

If you visit the RPG in a Box website you will find the following definition about it:

RPG in a Box is designed to be a set of tools for easily creating 3D grid-based, voxel-style role-playing and adventure games—everything you will need for building and sharing your own game, all packaged together in a box, so to speak! This “box” will contain an assortment of editors (centered around a map editor and a voxel editor) that will allow you to make your game the way you want. I will be striving to make the software user-friendly so that no knowledge of programming, computer graphics, or modeling will be required, all while still maintaining as many customizable aspects as possible so that your game can be unique.

RPG in a Box is an engined intended for building this style of play. Developed in GODOT, it adds a series of tools that make it quite robust and make it a very interesting concept. The basic interface shows a Game Explorer with the main elements of your game, besides the importers of several resources (sounds, voxels, etc) 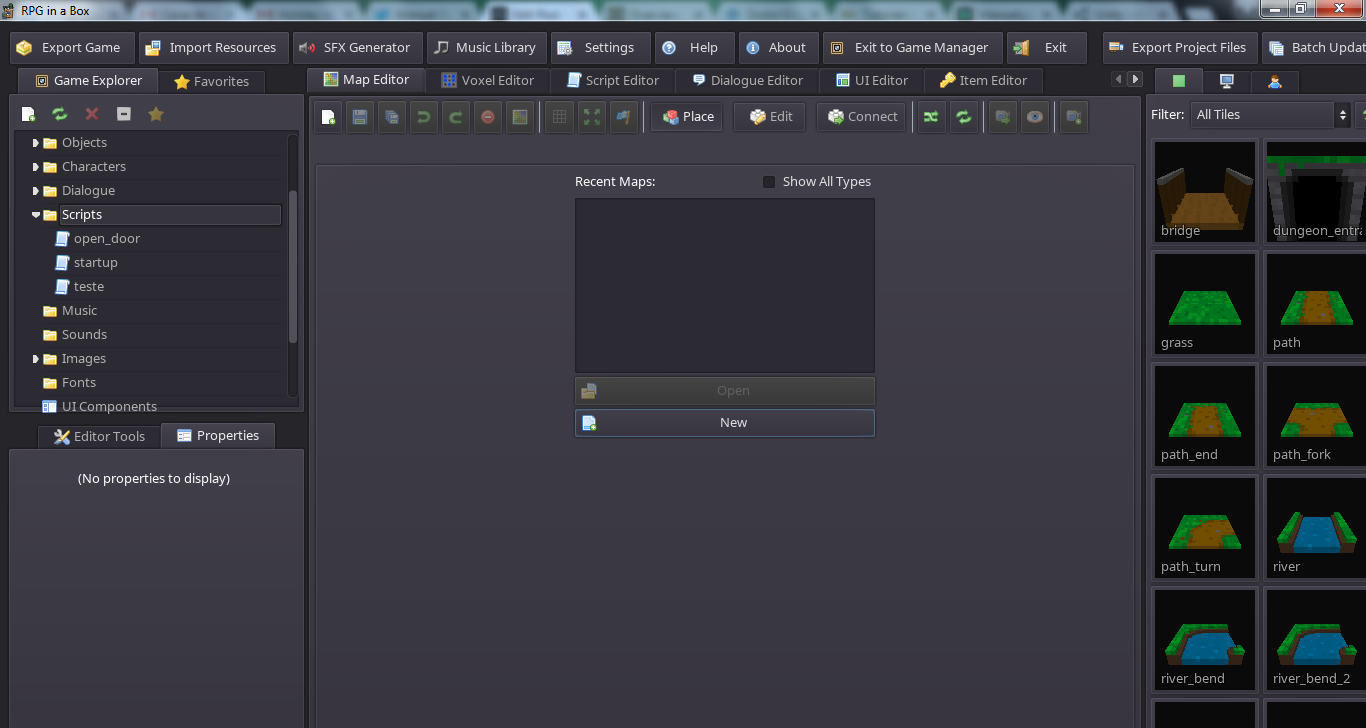 The similarity of its interface with other engines – containing the main elements for the creation of a game – helps a lot, as it adds familiarity for veteran developers willing to give it a try. The software has the following modules:

I think the way the software is organized adds great value for creating RPGs. Let’s take a look at each one of its editors so we can have a better overview of how this engine works as a whole. 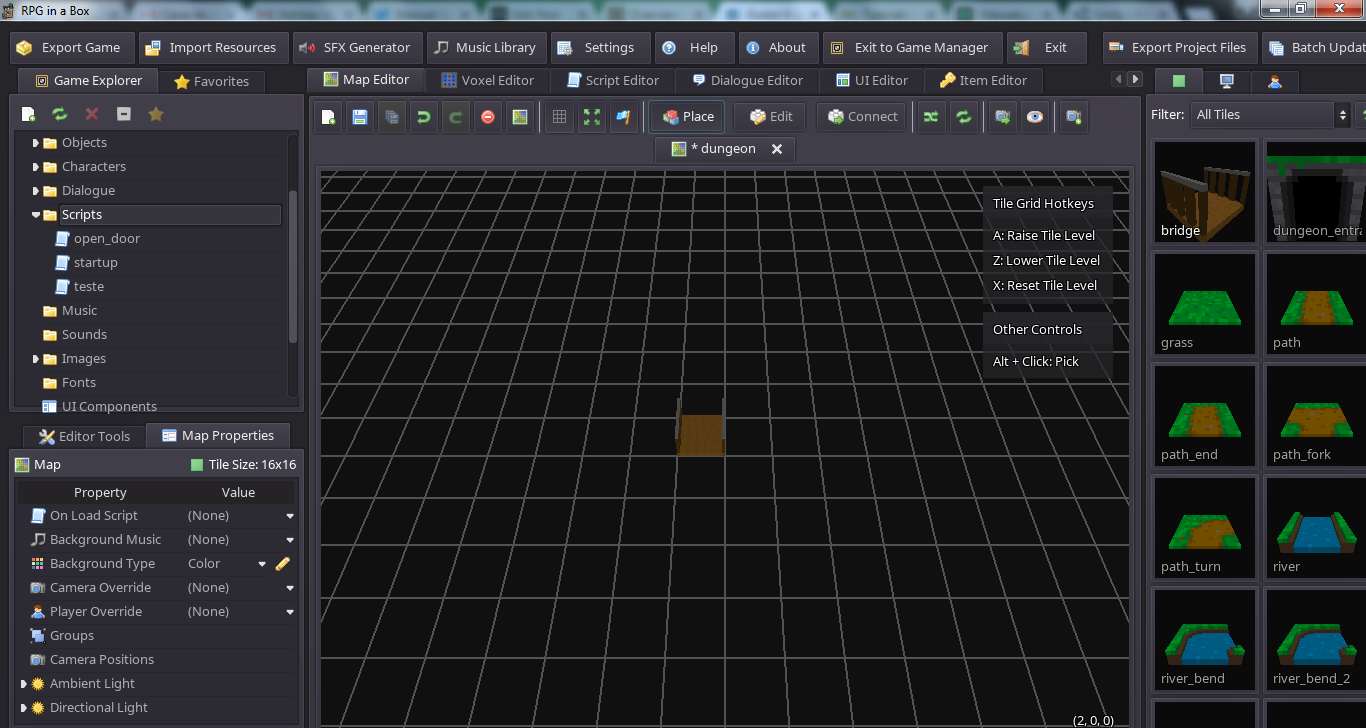 When a new game is created, RPG in a Box already loads up some very interesting examples with ready-made maps and an entire example structure. A first and important point to be noticed here is that when we create a map and it does not request the size of that map, but of each tile (these tiles are voxels that make up the map). I would very much like to suggest that in future versions it would be possible to determine the size of the maps themselves.

The usability of the editor is quite simple and allows for a number of editing operations. Besides, the developer can see the tiles that can be used in the composition of a map. These tiles are usually created inside the RPG editor in a Box or imported from applications such as the Magica Voxel. It is very important for you to start using the example map that comes with the tool as it can give you a series of important tips. It is important to stress that when we create a map, the software already shows the way in which our character can move.

Another very important point is that we can change the camera from game to vision, top-down, first-person and Isometric (default). This is an awesome feature. 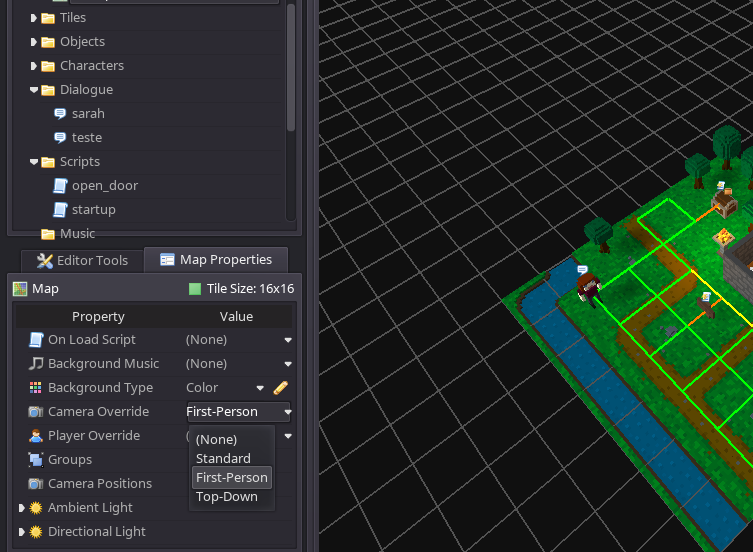 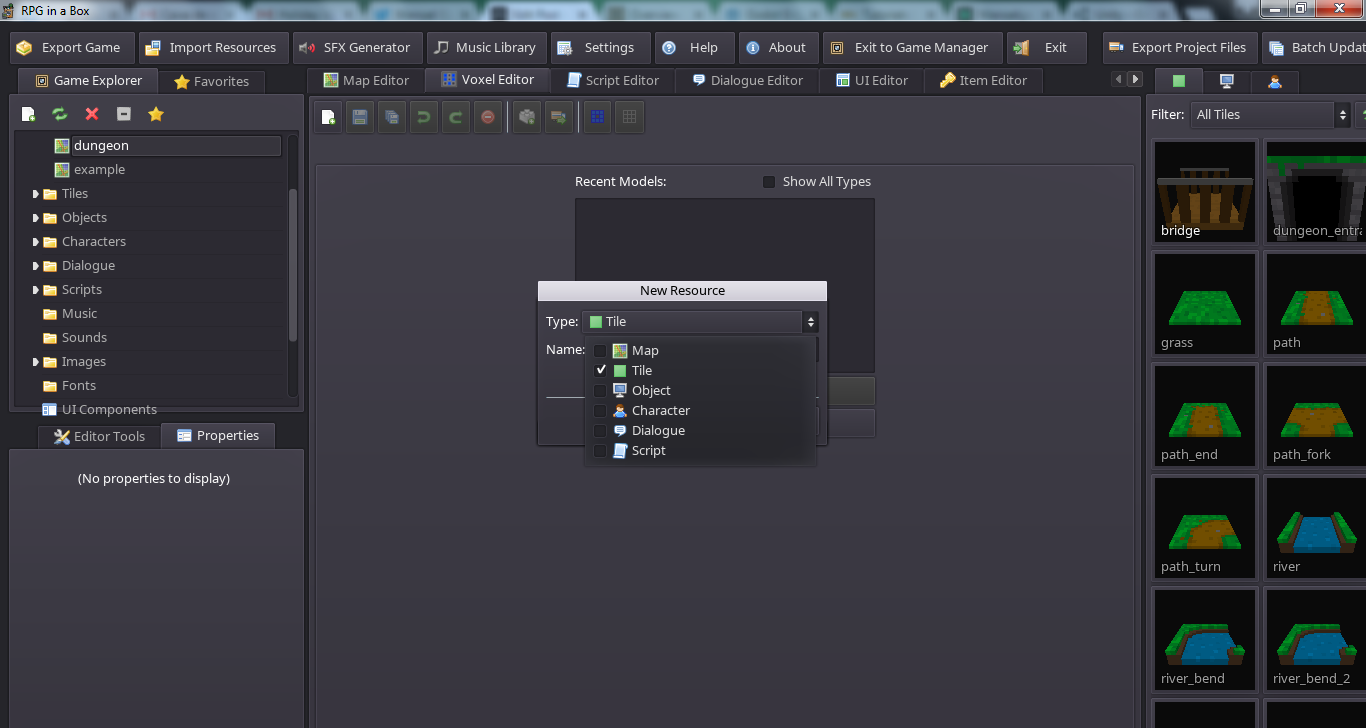 The Voxel editor is the heart of the engine. With it, we can create tiles for maps, objects, and characters. The publisher is very modest and is in constant development, but for those who do not yet dominate other publishers like Magica or Qubicle, it is an excellent option. 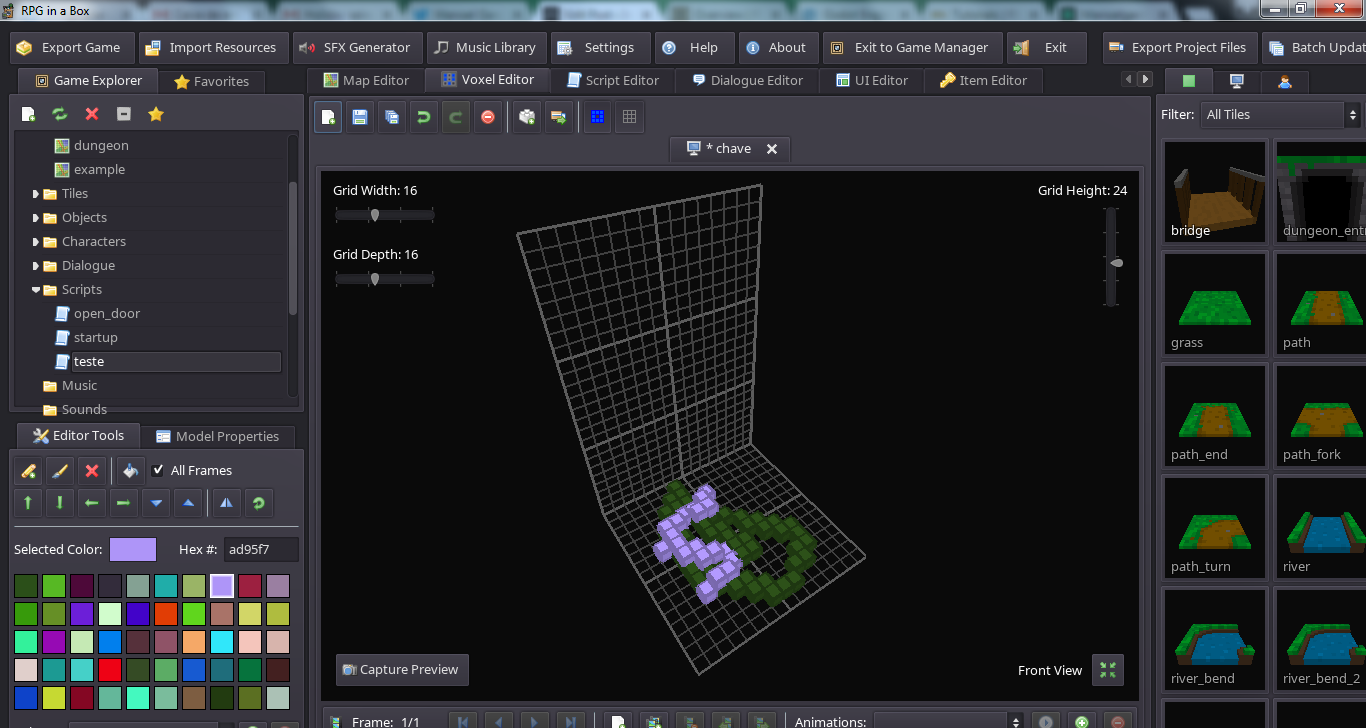 It has the basic features that won’t let you down, but I particularly prefer to use Magica for that, out of which models are imported without any problems into RPG in a BOx (thumbs up for the importer). I did several import and editing tests within the program and I was extremely pleased with the results. Another strong point of the editor is that it has a system for voxel animation, which allows you to create actions like walking, shooting, etc. At this point, it is a very interesting resource that gives you enough freedom so you don’t need to depend on other applications during your development flow. 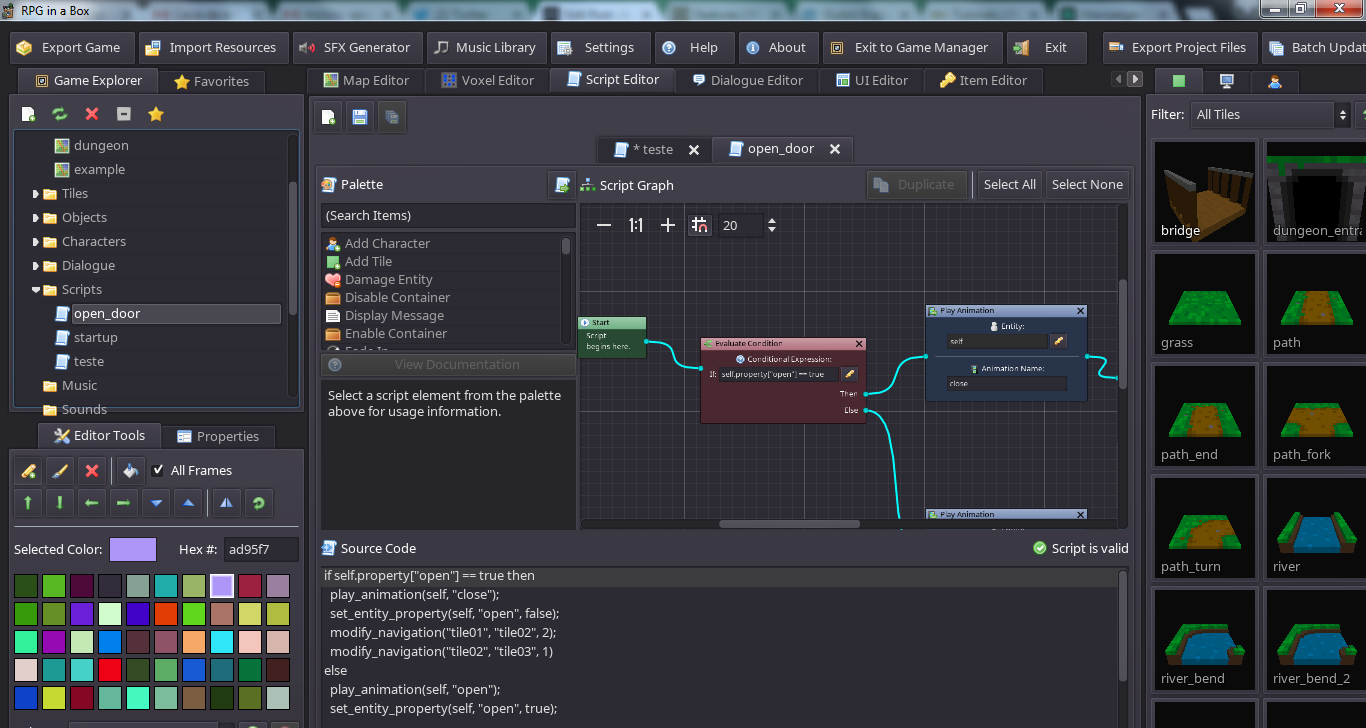 The script editor combines a number of very interesting features. One of the most important is the ability to work with event-based actions in a drag-and-drop style (which reminds me of the Unreal Blueprint or the Unity Flow Canvas), which has become a very easy way for non-programmers to create games. This feature is known in the editor as Script Graph. That is the area where the whole event system is created. In addition, the RPG in a Box allows the editing of code, which is generated automatically when we assemble a script. These scripts can be associated with maps, objects, and actions within the game itself. 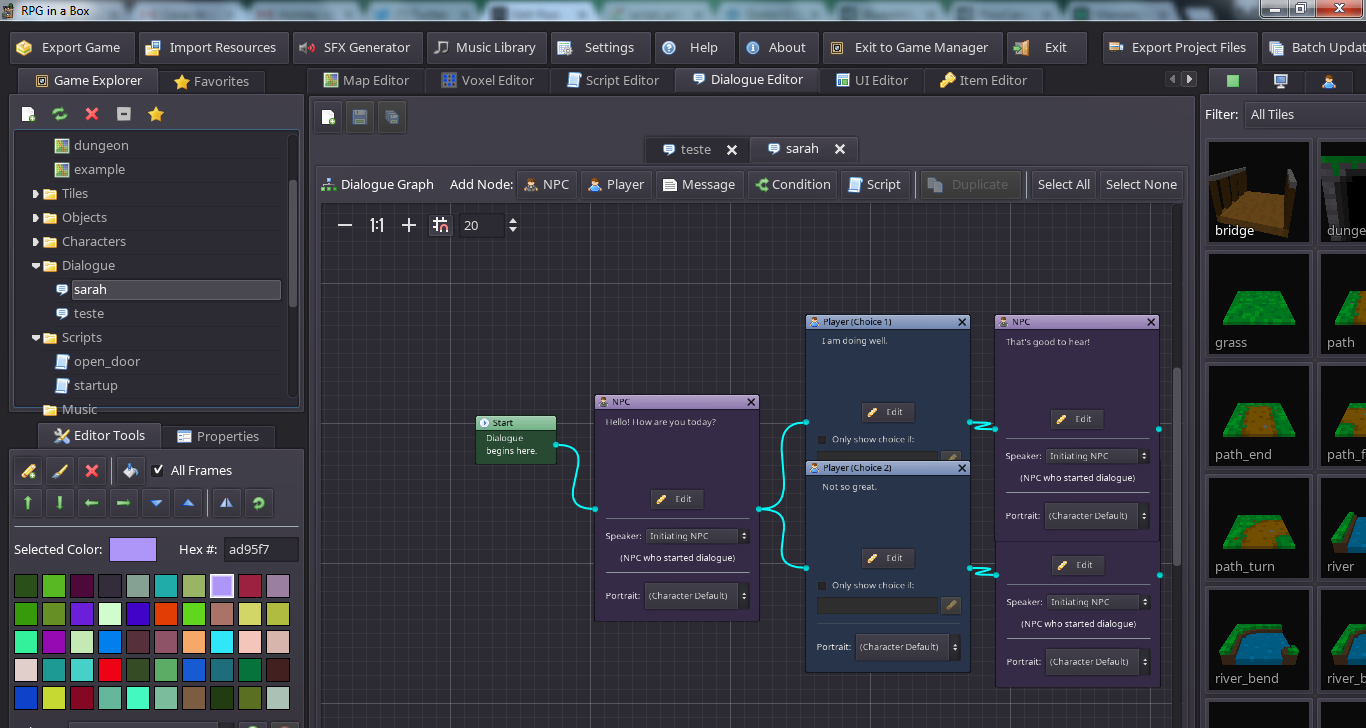 The dialog editor allows not only interactions with NPCs, but also for calling scripts to perform events (the so-called quick events). Basically, we see the first limitation of the system, because it has not yet implemented a system of quests (a feature to be implemented in the future). This limits some of the options we can have. But one advantage is that its system is based on a visual interface, which helps a lot in the editing of dialogs and makes this routine very easy to execute. 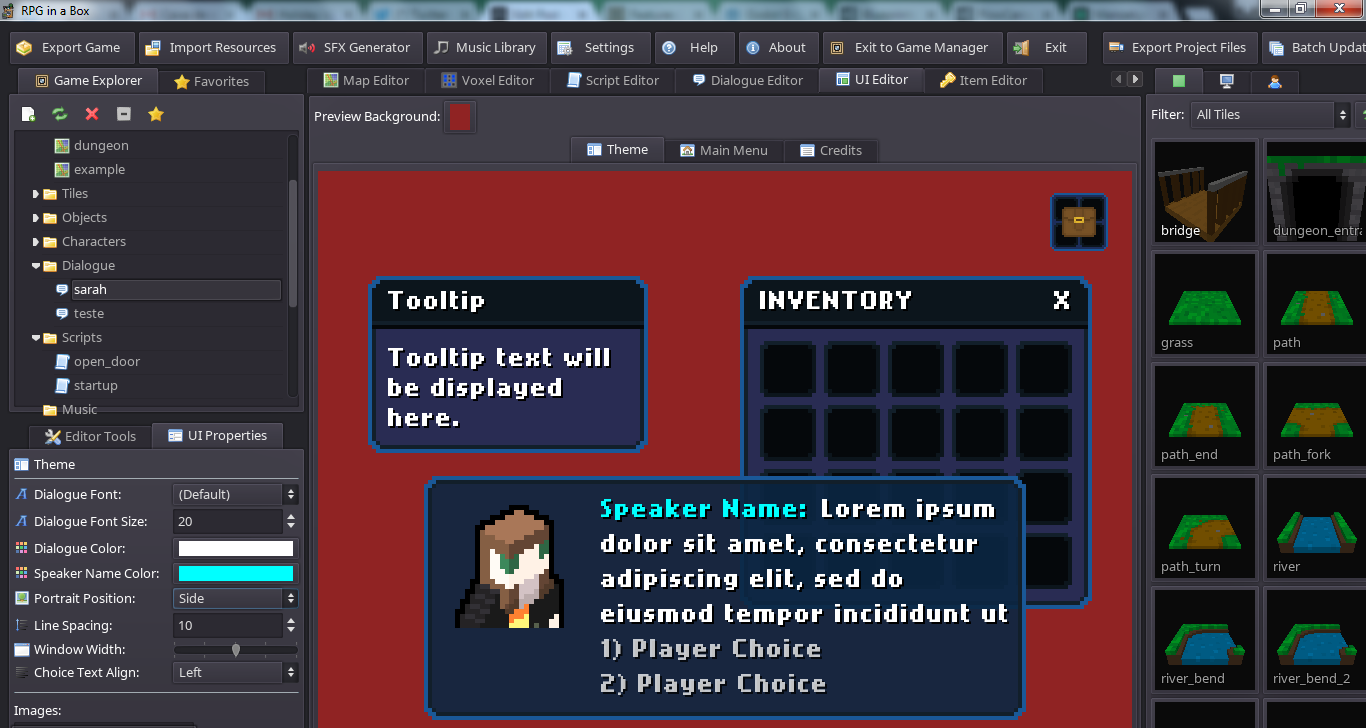 The UI Editor is still in early development, allowing very few modifications in its characteristics (layout, basically). It is already part of the list of changes to be made in future versions that will make the system more attractive. 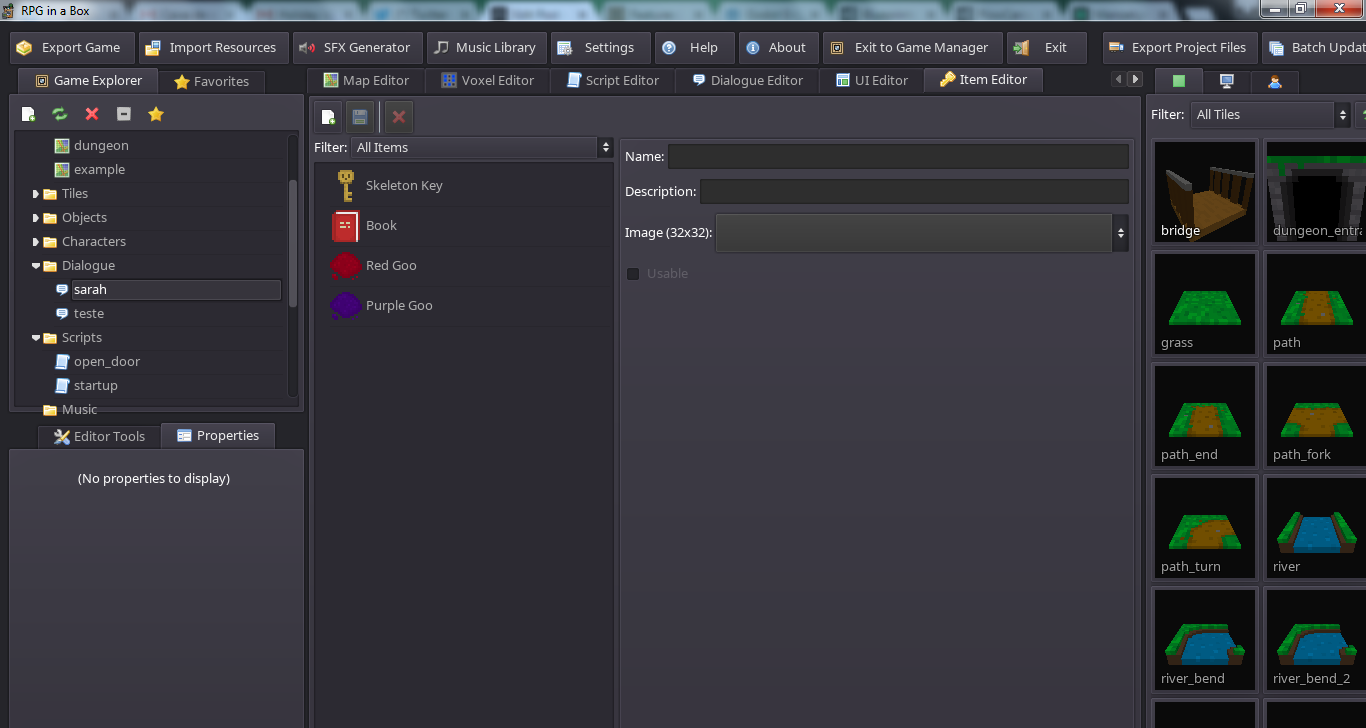 The item editor is one of the well-resourced features in the system. You can create many different items like keys, potions, etc, by associating scripts to them, thus creating in-game events. One of the strange things is that mobs are treated as game items. I believe, however, that this is just a matter of getting familiarized with the tool itself. In addition to associating the object with an action, it is possible to create 32×32 pixel images so that they appear in the character’s inventory. Simple and straightforward, it fulfills its role. 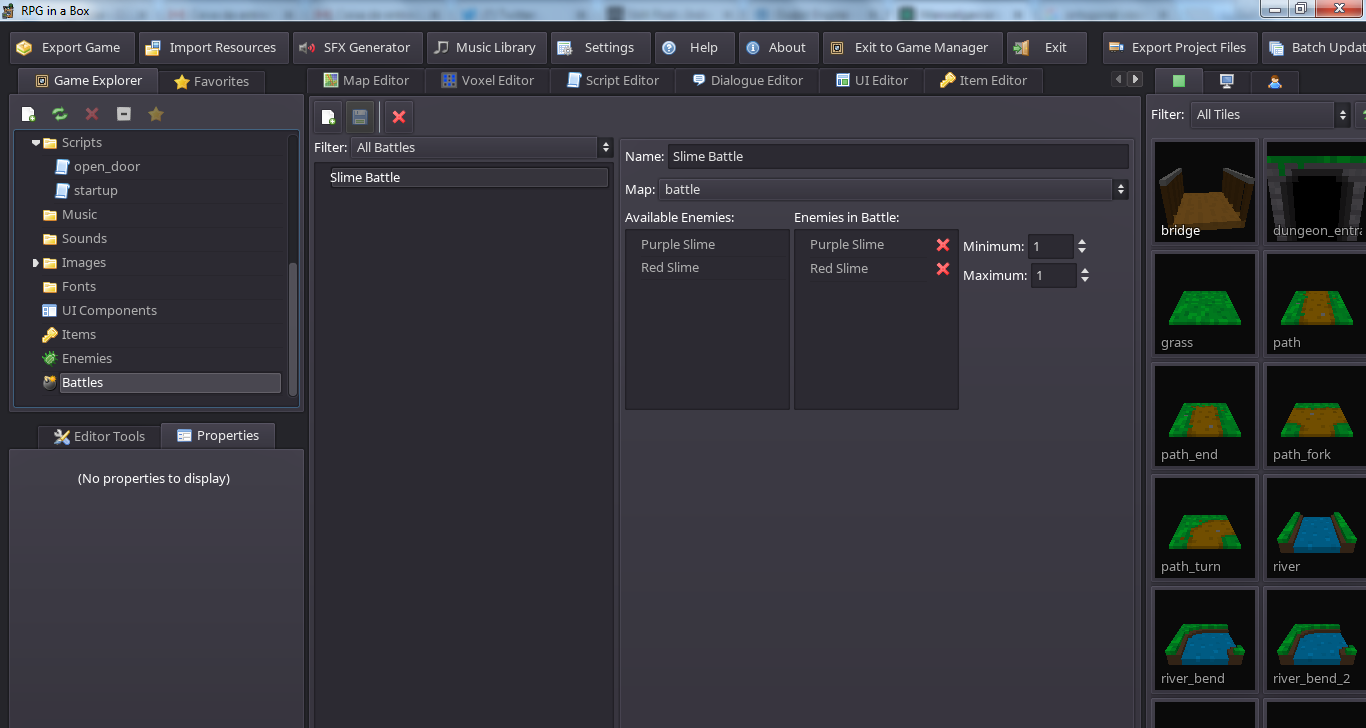 Another interesting thing that, in my opinion, deserves a better documentation is the turn-based battle system. It’s very interesting, but the documentation is very initial and we can only learn more about it from some official tutorials available online.

A game can be exported to Windows (64 and 32), MacOS and Linux. In the test I performed, I exported all my initial projects to Windows 64 and all, with no exceptions, ran without any issues. I have not had the opportunity to export to other platforms, but I believe it’s a matter of enhancing testing. The mouse and keyboard support is perfect, but there is no support for gamepads, for example (one of the items in the list of future implementations). It is desirable that certain customizations can be made, but I believe this can be done in future versions.

As a product still under development, RPG in a BOX promises a lot. The potential that the tool can achieve is enormous, but it still needs some time to evolve. The lack of documentation and more examples for the beginner is a very problematic barrier. The video tutorial on scripts below shows a lot of the application. I’m looking forward to more videos like that.

There are small bugs that can be a little annoying, like for example when we delete a certain object, it appears on the list. When the program is restarted, it disappears. I’ve been able to crash the software a few times, but after the last updates, that stopped. There are some small visual bugs (example list of events in the scripts) that bother.

However, I would like to present some VERY positive things about this software:

Some things are missing, but looking at the list of those who come around, we can expect very good things from this software.

Would you buy the RPG in a BOX?

In fact, I already bought it and I’m quite happy with it. There are already games developed in it and that serve as good tutorials for the beginner. I believe the $ 20.00 investment is worth your while and it serves as a good study tool for anyone who wants to do something really cool. It’s a project worth investing in if you enjoy Voxels and RPG. 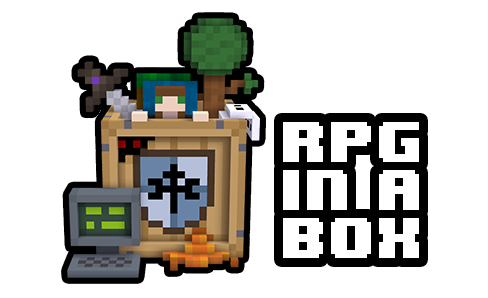 On the beautiful and forgettable Blade Runner 2049