When I logged on to Steam today, I saw several attractive-looking games in the feature window. Some pixel-horror, some free-to-plays and some handsome-looking brawler called Rampage Knights. Oh baby!

What I got instead was a cheap little turd called “There’s Poop in my Soup” by Rudder Games. It currently has 88% positive reviews, giving it a Very Positive status. Let’s see for ourselves. . . 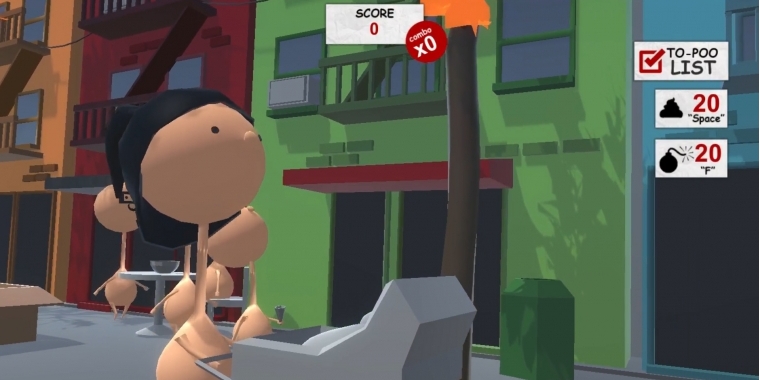 The screenshot does not give much hope for this game. Actually, this isn’t a true screenshot. The game itself is a straight-on view of a busy street in New York, Beijing or Paris. As people walk by below you ,you let ‘er rip and lay little turds atop their heads, in their baby carriages, on their dogs. Whatever.

Honestly, I think the devs could have come up with a few more things to poop on. But maybe I’m an overachiever.

You’re a guy who stands on high and poops down on people in interesting ways.

You are given a “to poo” list of things and people to poop on. As you check things off the list, you unlock the next level and the special weapon of the stage. This can be “the bomb,” a giant turd, “fireworks,” or lots of little turds that break apart into streamers, or whatever the last one was called (in Paris) which is just a continuous stream of liquid diarrhea.

I don’t know about this one, guys. I know it’s less than a buck, but I only have an hour or two a day to play. I think I could have skipped this one. Although I can’t deny some very satisfying moments watching pedestrians laid flat in droves under my smooshy onslaught. It’s a cheap game, but when compared to the quality of offerings like Reveal the Deep, I’m not sure I can recommend this.

I try to offer some insights to devs in each of my posts. An expansion to this game would add value. I played through the game in 30 minutes. The gameplay is fun, but sometimes the little beam that shows where the poop will land is not positioned perfectly. Also, on my screen the buttons on the right block the screen. Small stuff for a small game, but this is a competitive market with many high-quality games that cost nothing.

That said, this is a decent dollar game. And I have to give due credit for the idea itself. I love a good rhyme. And poop. As a weapon!

Steve is an IndieWatch O.G. He has long supplied marketing information for the aspiring developer. More recently he has been creating content for retrogaming enthusiasts on his YouTube channel. Find him on Twitter @Longie_long and at Patreon.

If your game is so great, why haven't I heard of it?

Choosing the Right Technology for a Narratively Heavy Game