(Adapted from the afterword to Unity in Action

. A great intro book for programmers new to Unity!) 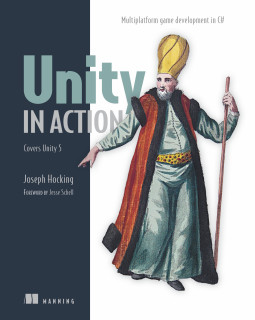 After reading my book Unity in Action you know everything you need to know in order to build a complete game using Unity—everything from a programming standpoint, that is; a top-notch game needs fantastic art and sounds, too. But success as a game developer involves a lot more than technical skills. Let’s face it—learning Unity isn’t really your end goal. Your goal is to create successful games, and Unity is just a tool (granted, a very good tool) to get you to that goal.

Beyond the technical skills to implement everything in the game, you need an additional intangible attribute: grit. I’m talking about the doggedness and confidence to keep working on a challenging project and see it through to the end, what I sometimes refer to as “finishing ability.” There’s only one way to build up your finishing ability, and that’s to complete lots of projects. That seems like a catch-22 (to gain the ability to complete projects, you first need to complete a lot of projects), but the key point to recognize is that small projects are way easier to complete than large projects.

Thus, the path forward is to first build a lot of small projects—because those are easy to complete—and work up to larger projects. Many new game developers make the mistake of tackling a project that’s too large. They make this mistake for two main reasons: they want to copy their favorite (big) game, and everyone underestimates how much work it takes to make a game. The project seemingly starts off fine but quickly gets bogged down in too many challenges, and eventually, the developer gets dejected and quits.

Instead, someone new to game development should start small. Start with projects so small that they almost seem trivial; the projects in this book are the sort of “small, almost to the point of trivial” projects that you should start with. If you’ve done all the projects in this book, then you’ve already gotten a lot of these starter projects out of the way. Try something bigger for your next project, but be wary of making too big a jump. You’ll build up your skills and confidence so you can get a little more ambitious each time.

You’ll hear this same advice almost any time you ask how to start developing games. For example, Unity asked the web series Extra Credits (a great series about game development) to do some videos about starting in game dev, and you’ll find those videos on Unity’s website.

Game design
The entire Extra Credits series goes way beyond this handful of videos sponsored by Unity. It covers a lot of ground but mostly focuses on the discipline of game design.

Game design is the process of defining a game by creating its goals, rules, and challenges. Game design is not to be confused with visual design, which is designing appearance, not function; this is a common mistake because the average person is most familiar with “design” in the context of “graphic design.”

One of the most central parts of game design is crafting game mechanics; these are individual actions (or systems of actions) within a game. The mechanics in a game are often set up by its rules, whereas the challenges in a game generally come from applying the mechanics to specific situations. For example, walking around the game is a mechanic, whereas a maze is a kind of challenge based on that mechanic.

Thinking about game design can be tricky for newcomers to game development. On the one hand, the most successful (and satisfying to create!) games are built with interesting and innovative game mechanics. On the other hand, worrying too much about the design of your first game can distract you from other aspects of game development, like learning how to program a game. You’re better off starting out by aping the design of existing games (remember, I’m only talking about starting out; cloning existing games is great for initial practice, but eventually you’ll have enough skills and experience to branch out further).

That said, any successful game developer should be curious about game design. There are lots of ways to learn more about game design—you already know about the Extra Credits videos, but here are some other websites:
■ gamasutra
■ lostgarden
■ sloperama

There are also a number of great books on the subject, such as the following:
■ The Art of Game Design by Jesse Schell
■ Game Design Workshop by Tracy Fullerton
■ A Theory of Fun for Game Design by Raph Koster

The word marketing often evokes thoughts of ads, and if you have the budget, then running ads for your game is certainly one way to market it. But there are lots of low cost or even free ways to get the word out about your game. Specifics tend to change over time, but overall strategies mentioned in that video include tweeting about your game (or posting on social media in general, not just Twitter) and creating a trailer video to share on YouTube with reviewers, bloggers, and so on. Be persistent and get creative!

Now go and create some great games. Good luck on your journey!

Top 3 Steam Deals for the week

Review: Way of Gold and Steel